Twenty-five-year-old Army Staff Sergeant, Alex Ramon Jimenez, was assigned to the 4th Battalion, 31st Infantry Regiment, 2nd Brigade Combat Team, 10th Mountain Division in Fort Drum, New York. On May 12, 2007, he was captured  by enemy forces in Jurf es Sakhr, Iraq when his unit was attacked by insurgents using automatic fire and explosives. Fourteen months passed before the remains of Jimenez and his comrade were found on July 8, 2008. 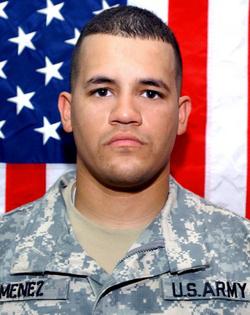 While the U.S. Military was searching for Alex in Iraq, his wife back home in Massachusetts was being deported by the U.S. government. Yaderlin’s case gained national exposure soon after Alex’s disappearance; her application caught the attention of immigration officials and removal proceedings began.

The government wanted Yaderlin to leave the United States and seek her immigrant visa in the Dominican Republic. What were her chances? With her husband missing and without his support, she could not hope to return to the United States.  What’s more, after departing the United States, she would be barred for 10 years from applying. Her situation seemed hopeless.

An Immigration Judge issued a temporary stay on the proceedings. Eventually, the Department of Homeland Security exercised its authority to grant a “discretionary parole” to Yaderlin. With this measure in place, she was eligible to adjust status to a permanent resident despite her unlawful entry.

In recognition of Staff Sergeant Jimenez’s ultimate sacrifice to his country, USCIS issued a memorandum in November 2013 announcing a new policy known as Parole-in-Place that allows immediate relatives of current or past United States citizens in the Military, who entered the U.S. without documents to be granted temporary legalized status, possibly leading to permanent residency. In November 2016, USCIS issued a new memorandum clarifying and supplementing the previous memo.

USCIS recognizes the important sacrifices made by U.S. service members, veterans, enlistees, and their families. To support these individuals, they provide discretionary options such as Parole-in-Place or Deferred Action on a case-by-case basis.

On February 4, 2021, a legislation to amend the executive law, in relation to establishing the Staff Sergeant Alex R. Jimenez New York State Military Immigrant Family Legacy Program, was introduced to the Committee on Governmental Operations by Assemblywoman Catalina Cruz, who represents the 39th Assembly District of New York. The legislation is also co-sponsored by Assemblyman Jake Ashby, who represents the 107th Assembly District.

The purpose of this bill is to establish a program that shall assist the foreign-born family members of New York State Veterans, discharged LGBT Veterans, and currently serving service members, as well as non-citizen service members or Veterans, to secure legal immigration status in the United States, including but not limited to citizenship.

You can visit Alex' Obituary posted in Legacy.com

USCIS may grant Parole-in-Place on a case-by-case basis for urgent humanitarian reasons or significant public benefit. You may be eligible for parole-in-place in one-year increments if you are the spouse, widow(er), parent, son or daughter of an:

If you entered the U.S. lawfully, but overstayed your visa (or are otherwise in the U.S. past your period of authorized stay), you are not eligible for Parole-in-Place because you are not an applicant for admission. However, you may qualify for Deferred Action.

What is Deferred Action?

Deferred Action is a form of prosecutorial discretion to defer removal action (deportation) against an individual for a certain period of time. If you are granted Deferred Action, the Department of Homeland Security (DHS) considers you to be lawfully present in the U.S. for the period Deferred Action is in effect. Deferred Action does not give you lawful status, nor does it excuse any past or future periods of unlawful presence.

You may be eligible for Deferred Action for up to two years if you are the spouse, widow(er), parent, son or daughter of an:


DISCLAIMER: Signature Immigration Forms, Inc. ("Signature") is NOT a law firm. Signature is NOT endorsed by or affiliated with, USCIS, DHS, or any U.S. government entity. At the Client’s request, by selecting any of our Services, Signature provides U.S. Immigration Government Form Preparation Services. Signature’s fees for Services DO NOT include USCIS filing fees, biometrics service fees, or any other fees to be paid to the government. Any fee intended for the government is a separate fee and MUST be paid by the Client directly to USCIS. The Client is responsible to mail the completed and signed form, supporting documents, and filing fees directly to USCIS. Signature DOES NOT do that for the Clients. The forms we prepare, and the instructions for the forms, are available for free at the USCIS website. Client access to, and use of any of Signature’s websites and our mobile app, is subject to our Terms and Conditions and Privacy Policy. Legal Services provided by independent Attorneys are subject to separate Terms and Conditions, Privacy Policy, and Limited Scope of Representation Agreements.